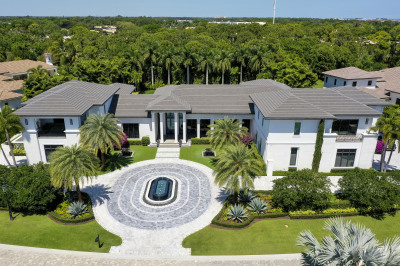 View All 243 Listings For Sale

Homes in Palm Beach Gardens begin at one to two bedroom condominiums and townhouses, and range up in size to spectacular custom estates. Most of the communities offer luxurious comforts including golf and tennis memberships, and high-end clubhouses with many dining choices and social memberships. Many waterfront properties are available, either on the Intracoastal or the oceanfront.

Families appreciate the easy lifestyle on offer here – there are many choices of single family homes both in gated and non-gated communities, all of which enjoy the gorgeous tropical climate. Options for private schools in Palm Beach Gardens are some of the finest in the country, and sports plans at all the high schools are very strong.

Palm Beach Gardens offers an excellent selection of entertainment and things to do, including upscale eateries, superb shopping and immaculate beaches. A mixture of “snowbirds”, families, singles, and retirees decide to live in Palm Beach Gardens due to the fantastic lifestyle on offer here.

Golf draws many people to the area, and lots of professional golfers live here. The headquarters of the Professional Golfers’ Association is found here, along with many championship courses. The area appeals to golfers of all levels given the abundance of chances for play. PGA National alone offers four courses, including the famous Championship Course for the Honda Classic Golf Tournament, a Jack Nicklaus design known for the challenging Bear Trap. The other three courses were designed by George and Tom Fazio, Arnold Palmer and Karl Litten.

There are many options for dining out to suit every taste, including several eateries that are located on the water. Big department stores such as Bloomingdales, Nordstrom and Saks Fifth Avenue, along with many other top high-end retail stores can be found at The Gardens Mall. Downtown at the Gardens is the open air shopping mall that offers live music and other events, along with the Cobb Movie Theater and Whole Foods Market.

Palm Beach Gardens is still being developed with new residential and commercial building taking place along the Intracoastal, and larger home lots being constructed further west. The city ensures that 30% is dedicated to preserve areas which allows residents to enjoy the gorgeous greenery and park areas throughout the town. The tropical landscaping and ocean access coupled with a vibrant town center ensures residents enjoy a truly luxury lifestyle. Palm Beach Gardens Homes For Sale will always be popular and highly sought after.

The History of Palm Beach Gardens

Prior to development, the land that became Palm Beach Gardens was primarily cattle ranches and pine forests, as well as swampland further west. In 1959, wealthy landowner and insurance magnate John D. MacArthur announced plans to develop 4,000 acres (16 km²) and build homes for 55,000 people. He chose the name Palm Beach Gardens after his initial choice, Palm Beach City, was denied by the Florida Legislature, because of the similarity of the name to the nearby Palm Beach. MacArthur planned to build a “garden city” so he altered the name slightly. The city was incorporated as a “paper town” (meaning that it existed only on paper) in 1959. The 1960 Census recorded that the city officially had a population of one, apparently a squatter whom MacArthur had allowed to stay on his property.

Rapid development took place in the 1960s. By 1970 the city had a population approaching 7,000 people. To showcase his new community, MacArthur purchased an 80-year-old banyan tree located in nearby Lake Park, that was to be cut down to enlarge a dentist’s office. It cost $30,000 and 1008 hours of manpower to move it. A second banyan was moved the following year. While moving the first banyan tree over the Florida East Coast Railway, the massive tree shifted and disconnected the Western Union telephone and telegraph lines running adjacent to the railroad, cutting off most communications between Miami, 80 miles to the south, and the outside world until the damage could be repaired. These trees still remain at the center of MacArthur Boulevard near Northlake Boulevard and are still featured on the city shield. In January 2007, the great-grandson of impressionist artist Pierre-Auguste Renoir, Alexandre Renoir, presented a painting to the city which depicts the Gardens banyan tree. It is currently on display at the city hall on North Military Trail.

City growth was slow but steady throughout the 1970s and 1980s, as the population has still not reached the predicted 55,000 people envisioned by MacArthur. However, the opening of the 1.3-million-square foot Gardens Mall in 1988 initiated a new wave of development, as did the sell off in 1999 of approximately 5,000 acres (20 km²) in the city by the John D. and Catherine T. MacArthur Foundation. Development of this property happened quickly and led to much new growth in the city. The city adopted an Art In Public Places ordinance in 1989 and has amassed an eclectic collection of works.

The city suffered much damage to its tropical landscaping in the hard freezes of 1985 and 1989, but has experienced no freezing temperatures since then. The city was hit by Hurricane Frances, Hurricane Jeanne, and Hurricane Wilma in 2004 and 2005. Much of the city lost power for days at a time after each storm, and many traffic signals and directional signs in the city were destroyed. Many homes and businesses were severely damaged during the first two storms and contractors and construction materials were at a premium. Hundreds of homes were only nearing final repair when Hurricane Wilma hit the following year damaging or destroying many of those completed or ongoing repairs.

Alert Me of New Listings

What's your home really worth?

Check your home's value for free

Email me when new listings are available!

Email me when my dream home hits the market

Already Signed Up? Forgot Password/PIN?
Don't have an account yet?
MyHomes lets you do more

In only 30 seconds you will have full access to property, community info and SOLD data you can't get anywhere else.